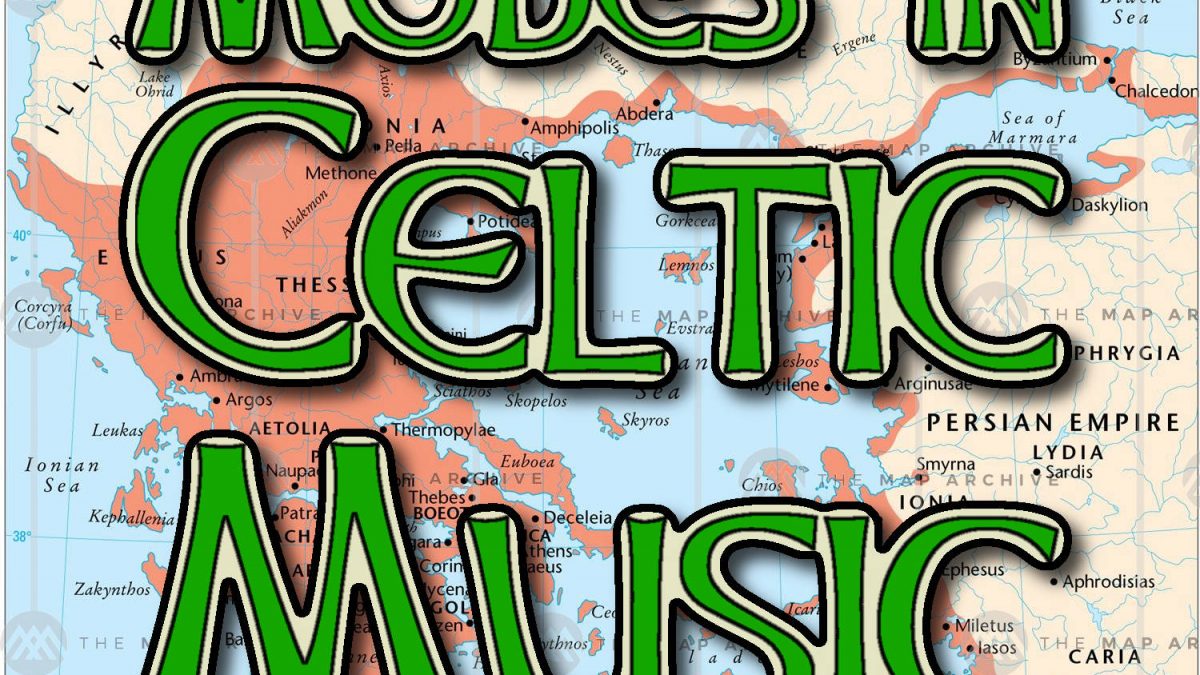 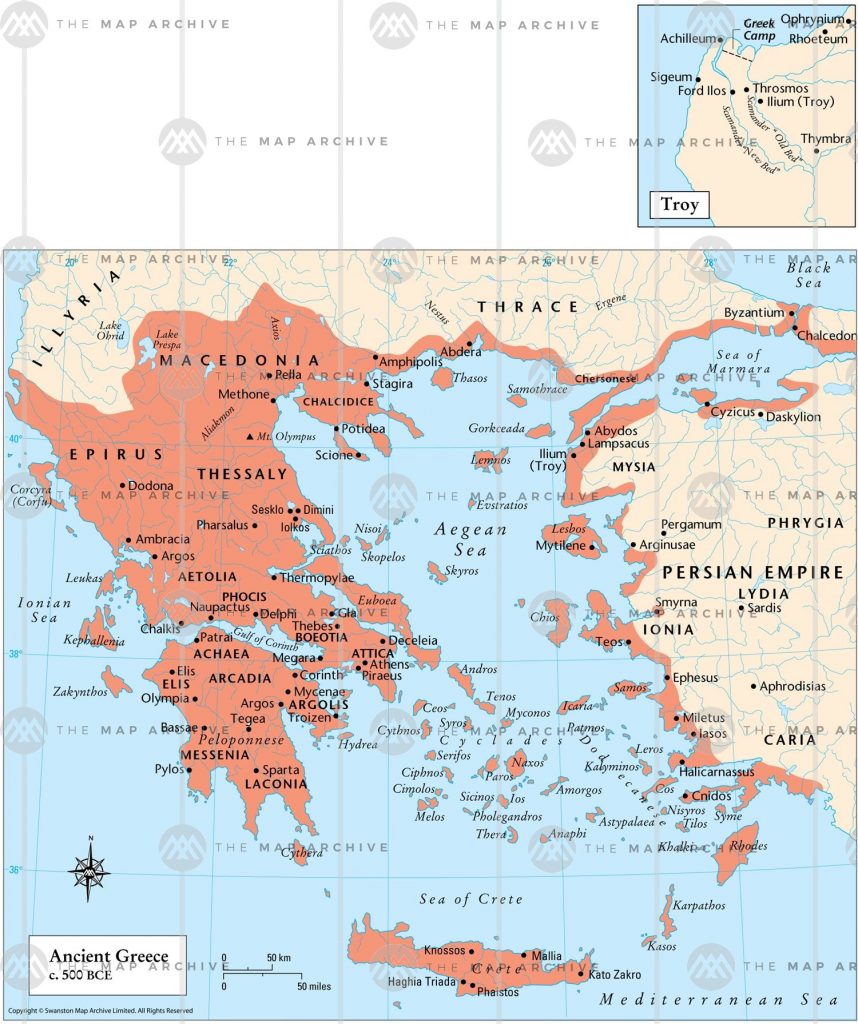 Map of ancient Greece, 500BC

What follows is a slightly modified section taken from my book, Backing Guitar Techniques for Traditional Celtic Music. It is available here as an e-book with accompanying audio download or here in paperback.

I have also made two accompanying videos which cover all the material in this blog and delve into how to find the chords to fit with each mode- you can find them at the bottom of this page.

There are seven “Greek modes” (named after regions in ancient Greece and surrounding areas) and it is important to remember their names and orders. These are as follows:

I find it easier to remember their names using this helpful mnemonic:
I Don’t Punch Little Men After Lunch.

Folk music from the Celtic tradition generally only uses four of them (apart from some modern tunes) so it is on these four that I will focus in this blog, but as I’ve said it will be VERY useful to you to remember the names and orders of all of them.

The four Celtic modes are:

It is important to practice listening for the differences between modes. If you buy my e-book, Backing Guitar Techniques For Traditional Celtic Music, you can hear play-throughs of each mode in the accompanying audio. Developing your ear is the most important thing you can do as a backing guitarist.

To help with the identification of modes it is useful to identify the characteristic sound of each one. To this end I have described in the following table the way that each mode differs from a major scale and also (far more importantly) how I would describe their characters. In order to keep the strain on your memory to a minimum I have only included the ones which are relevant to the traditional music of the Celtic nations.

It never ceases to amaze me how many backing guitarists cannot hear which mode is being played – please don’t be like them. Practice memorising the characteristic sound of each mode as much as you can.

Remember I said it would be useful to remember the names and order of all the modes? Well here’s why. The C ionian (aka C major) scale is all the white notes on a piano, aka C, D, E, F, G, A, B and back to C. If you don’t know why the scale contains those particular notes then you can find out in my previous blog available here.

If you play those same notes but starting and ending on the 2nd degree of the scale, aka D, you will have just played a D dorian scale, D, E, F, G, A, B, C, D. D dorian is a minor sounding scale (with a more optimistic quality than aeolian due to the 6th note in aeolian being flattened) starting and finishing on D. Your ears infer from the starting and finishing note that the scale being played is a minor scale based on D rather than a major scale based on C. They infer the mode of tunes by listening for which notes are most prevalent on dominant beats of the melody and which note the tune finished on.

The point is that the modes are all related meaning that if you remember their order, you can work out what notes they contain easily. Knowing this will help you work out their key signatures, a useful bit of knowledge when learning to pick the right chords.

The related nature of modes can also be used to work out all the possible chords available in a given mode, because the chord scale is also related. Again, if you don’t know what I mean by “the chord scale”, then please review my previous blog which will show you why certain chords work together in a major key.

Here’s an example:
Humours of Ballyloughlin is a jig in D mixolydian (recording included in the audio folder which comes free with my e-book). Mixolydian is the 5th of the Greek modes. If D is the 5th note, the 1st is G (count back through the alphabet). Therefore it contains the same notes as a G ionian (major) scale, aka G, A, B, C, D, E, F# and G. However, in order to make it D mixolydian you start and finish on D instead, so the scale would be D, E, F#, G, A, B, C and D.

Therefore the chords that you can use under Humours of Ballyloughlin are the same ones which would be available for a tune in G major but with the root changed to the 5th degree of a G major scale, which is D;

This is true for all the modes, so related to G ionian, the same chords would be available in A dorian, B phrygian, C lydian, D mixolydian, E aeolian and F# locrian.

D ionian would contain the same notes and chords as E dorian, F# phrygian, G lydian, A mixolydian, B aeolian and C# locrian.

Why the sharps? Because they come from the major scale. A D major scale has F# and C# in it. Thus the third chord in the key of D major will be an F# based chord. This holds true for any other modes which contain the same notes, so E dorian also contains F# and C#, as do F# phrygian, G lydian etc. This is why it’s useful to memorise the key signatures.

For folk purposes you only need remember the “folk keys”. Here’s a table of the common ones, which also shows which contain the same chords. It is probably wise to make your own differently formatted version of the table below in order to help you remember them (even better if you work them all out yourself and then double check against this table). 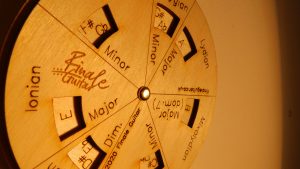 Quite possibly the most useful device ever

If you’re a bit confused by all of the above, or would like a quick and easy way to memories it all there is an easy way to fully understand and apply modal theory to your Celtic backing guitar. A much easier way to learn which chords go together is to use my invention the Amazing Mode Wheel. This device is super useful for about a million reasons. It has far too many applications to fully enumerate here, but here are a few of the things that it can do: 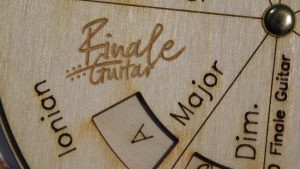 I have been using this device in my lessons for the past few months and it really does make the whole concept a million times easier to understand. Trials with my students have shown that working out which chords will fit with a given tune is made much easier with the help of the Mode Wheel and the visual representation makes the theory much easier to understand, memorise and apply.

Here are my videos demonstrating how the Greek modes work for Celtic guitarists- part one shows you how to form each of the modal scales and part two shows you how we work out the chords to fit with each one. You can find loads more great folk / Celtic guitar tutorials on my channel Folk Friend.